JARMAN (all this maddening beauty) will be seen at Dance Place on October 19, 2014 in Washington D.C. and October 23, 2014 in London, England at King’s College Arts and Humanities Program as a force/collision production.http://force-collision.org/announcing-jarman-upcoming-in-dc-uk-and-more/

UPON THE FRAGILE SHORE receives an alumni reading at New Dramatists onOctober 16, 2014 at 7 PM in New York City under Emily Mendelson’s direction followed by a conversation on human rights and art-making with Lucy Alibar, Mona Mansour, Tala Manassah, JT Rogers and Winter Miller. This event is part of the NoPassport for Human Rights International Reading Scheme produced in collaboration with Jody Christopherson and Missing Bolts Productions.

JARMAN (all this maddening beauty) is presented on www.homotopia.net

Caridad Svich’s THE WAY OF WATER is read on May 3rd at Columbia Greene Community College in Hudson, New York as winner of the 2014 Columbia Greene Playwright Project under Stewart Zully’s direction. Visit: mycommunitycollege.com
Caridad Svich’s A YEAR OF LIGHT has roundtable reading on May 8th at the Lark Play Development Center in New York City under Jose Zayas’ direction.
Caridad Svich’s THE HOUSE OF THE SPIRITS runs through May 25th at Teatro Lopez Tarso in Mexico City under Artus Chavez’ direction. Visit: http://carteleradeteatro.mx/teatro/sur/centro-cultural-san-angel/
April 2014: at a theatre near you from Caridad Svich

Caridad Svich’s IN THE TIME OF THE BUTTERFLIES (based on Julia Alvarez novel) runs April 4-May 4th at Teatro Nagual in Sacramento under Richard Falcon’s direction. Visit:http://www.teatronagual.com/Upcoming_Events.html

Caridad Svich’s ARCHIPELAGO receives reading April 6 at 7 PM with Sankofa Theatre in collaboration with Teatro Vista and NoPassport’s 30/30 in Chicago, Ilinois at Angel Island Theater under the direction of Kristen Johnson. Visit: https://www.facebook.com/events/1451637758401516/

Caridad Svich’s THE HOUSE OF THE SPIRITS (based on the Isabel Allende novel) continues through April 13, 2014 at Teatro Expressivo in Pinares, Costa Rica under the direction of Jose Zayas and Jody Steiger. For more information: http://www.espressivo.cr/

Caridad Svich’s JARMAN (all this maddening beauty), inspired by life and work of queer icon Derek Jarman, runs April 17-28, 2014 at Atlas Performing Arts Center in Washington D.C. under John Moletress’ direction as a force/collision production. For more info visit: http://force-collision.org/jarman and http://atlasarts.org/events/2011/07/jarman-all-this-maddening-beauty/ Note: There will be livestream performance on April 20th at 4 PM EST on Howlround. 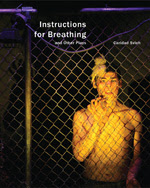 The centrepiece of this collection, Instructions for Breathing, is a lyrical, dreamlike meditation on responsibility and parenthood that asks an audience not only to suffer the unthinkable loss of a child as Svich’s characters do, but also to laugh at the couple’s flaws and at the hilarity of the suburban life they lead. This commingling of emotion happens in each of these dramatic portraits of homeless castaways (Fugitive Pieces), women in war (Thrush) and sex traffickers (Rift). And Svich’s work is not without a nod to the classical: Wreckage reframes the story of Medea and Steal Back Light from the Virtual depicts a labyrinthine society torn apart by a monstrous beast. In sum, Instructions for Breathing and Other Plays serves as an illuminating introduction to the work of a major playwright and an inspiring example of the breadth of possibilities in North American drama.

Available at the Seagull Books Store and online in India here and World here.

March 2014 at a theatre/venue near you from Caridad Svich

Caridad Svich’s THE HOUSE OF THE SPIRITS, based on the Isabel Allende novel, opens March 28, 2014 at Stage Door Teatro in Mexico City under the direction of Artus Chavez Novelo. For more information: https://twiter.com/stagedoormx.